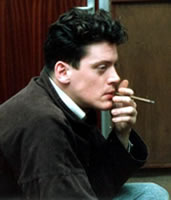 Alex Russell MA is a writer, painter and sculptor. He is the third son of Ken Russell, Film Director, and the late Shirley Russell, Film Costume Designer.  He was born in London on 23 August 1959 and studied at the Byam Shaw School of Art (1978-1979) and the Chelsea School of Art (1979-1980). In 1986 Alex took First Class Honours in a Cultural Studies Degree  where he made two films: East End of the Body and The Judy Garland Myth.  In 1987 He took an MA in Modern European Thought attending lectures by the radical Freudian theorist Mark Cousins.

In 1993 Alex became involved in the AIDS debate and later became Assistant Editor of Continuum, a nutritional health magazine promoting an alternative view of AIDS. In 1999, Alex returned to writing, drawing, painting and more recently, sculpture.  At his School of Francis Bacon website Alex is currently writing a philosophical treatise Being & Alien.  Alex currently writes art and concert reviews for Seen & Heard International whilst continuing his career as a painter and sculptor

Alex Russell – Where is proof of HIV? (PDF) Letter to International Journal of Alternative and Complementary Medicine – September 1995 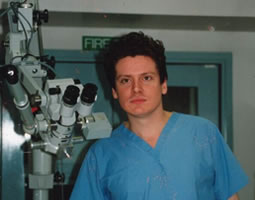 Soon after HIV tests were introduced in 1985, it was noticed that many haemophiliacs were shown to be
HIV positive. Robert Gallo seized upon this as evidence that AIDS was caused by an infectious, transmissible
organism, presumed to be conveyed  to the haemophiliacs as a contaminant in their clotting
factor preparations.

However, in the light of subsequent research, we can now see that the case of haemophiliacs, far from proving the existence of a transmissible retrovirus(HIV) alleged to have contaminated their clotting factor, proves conclusively, in fact, quite the reverse: HIV is not — and cannot be — the cause of AIDS.

Why did haemophiliacs start to die in appreciable numbers only after HIV was “discovered” in 1983? Surely if this alleged retrovirus was the cause of AIDS‚ we would have noticed their premature deaths before 1983: and why didn’t haemophiliacs die from KS (Kaposi’s sarcoma) and PCP (pneumocystis carinii pneumonia), the two original “AIDS” defining diseases?

Gallo tried to make the case that AIDS was caused by a transmissible agent and cited cases of haemophiliacs whom it was assumed were infected via the clotting factor VIII. This assumption was based on two premises that subsequently proved to be totally false: a) the amount of putative virus in a plasma donor/seller’s blood and b) that the virus would survive the manufacture of factor VIII from the pooled plasma.

Uncritical scientists and medics accepted this supposition. It soon became apparent, however, that the supposition was wrong. First, it was assumed that plasma donors/sellers were infected with HIV‚ and carrying titres of cell-free infectious virus particles that resulted in the contamination of the pooled plasma used in the manufacturer of factor VIII. Sometimes, these pools were as large as 30,000 donations of 600 millilitres (ml) of plasma. It was suggested that there was sufficient cell-free “HIV” in some of the donors to contaminate the whole batch. This supposed a massive titre of millions, if not billions, of viral particles in the infected donors. This was subsequently proved to be wrong. In the nearly 200,000 published scientific papers on HIV/AIDS, not one claims to have found a titre of more than 10 infectious particles per cubic ml of blood/plasma. There is no way that these negligible amounts of HIV, even if proven to exist, could have contaminated so much factor VIII that virtually all the haemophiliacs could be deemed infected with HIV. As Peter Duesberg rightly pointed out, the average amount of virus‚ claimed to be present in the plasma or blood of an HIV-infected individual, stands at between 1 and 1.7 infectious viral particles per cubic ml, which is absolutely negligible.

Thus, paucity of virus rules out the suggestion that HIV was transmitted to so many haemophiliacs in a comparatively short space of time.

Studies subsequent to 1985 showed that HIV cannot survive long outside the host’s body. This is confirmed by studies showing that spilled HIV‚ positive blood samples or spoiled laboratory cultures resulted in the quick death of the alleged “virus.” It was further discovered, and admitted by the Centers for Disease Control and Prevention (CDC), that dried HIV does not survive. Therefore, factor VIII that is subjected to cryoprecipitation (freeze drying) could not possibly contain viable, cell-free, infectious HIV, even if there had been any putative “virus” in the mix to begin with, which is extremely unlikely for reasons described above.

It was the 99 percent impurities in factor VIII that caused the immune suppression (AIDS) seen in haemophiliacs.  Hence, the early discovery that seroconversion in haemophiliacs seems to depend on the amount and duration of consumption – it is age and dose-related..  They were dependent on a product that would eventually kill them.  Also, as Duesberg observed, “Even haemophiliacs are not immortal.”

The introduction of AZT — administered in enormous doses — rapidly killed many haemophiliacs. Their premature deaths exactly coincided with the fast tracking of AZT to haemophiliacs on ‘compassionate’ grounds in 1986-7

Haemophiliac mortality increased only after the introduction of AZT in 1986. Since about half of Darby’s 2,037 severe haemophiliacs were already HIV-positive by this time, surely HIV-caused mortality should have exerted a detectable influence prior to 1985 in this group. Only Duesberg’s theory can explain why the explosion of haemophiliac mortality should occur only on the heels of HIV testing: The cytotoxic pharmaceutical drugs and psychological terror that invariably accompany a positive HIV test also contributed to the increased mortality.

In January 1994, the CDC communicated the following experimental data and conclusion: “In order to obtain data on the survival of HIV [in factor V111 clotting factor], laboratory studies have required the use of artificially high concentrations of laboratory grown virus … the amount of virus studied is not found in human specimens or any place else in nature … it does not spread or maintain infectiousness outside its host. Although these unnatural concentrations of HIV can be kept alive under precisely controlled and limited laboratory conditions, CDC studies have shown that drying of even these high concentrations of HIV reduces the number of infectious viruses by 90 to 99 percent within several hours. Since the HIV concentrations used in laboratory studies are much higher than those actually found in blood or other body specimens, drying of HIV-infected human blood or other body fluids reduces the theoretical risk of environmental transmission to that which has been observed — essentially zero.” (My emphasis.)

Ironically, the very original suggestion that haemophiliacs were proof of the HIV/AIDS hypothesis can now be used to deconstruct this redundant and failed paradigm. There is absolutely no way that HIV could have been transmitted via commercial clotting factors.

I would like to conclude with science journalist Christine Johnson’s critical observations: “No one has actually seen HIV in blood plasma. Its presence is inferred from the results of indirect and non-specific techniques applied to virus cultures. AIDS expert Jay Levy of the University of California was able to find what he believed were HIV particles in the plasma of only 30 percent of the AIDS patients he studied, and then, it was at a low concentration — 10 infectious particles per millilitre. Levy concedes that this isn’t enough to establish an infection.”

It is widely accepted that the surface of HIV must be studded with knobs containing the protein gp120, which is crucial to the virus’s ability to infect cells. But experts such as Hans Gelderblom of the Koch Institute in Berlin, who has conducted most of the electron micrography studies of HIV, say that the virus loses its knobs when it buds from the cell. This means that cell-free virus is incapable of infecting other cells. Since plasma does not contain cells, if HIV were present, it would not be inside a cell and thus it would not be capable of causing an infection.

In addition, there is the dilution factor. Factor VIII concentrate is made from the blood of thousands of donors pooled together. Statistically, only one or two of these donors might be infected, so by the time their blood is merged with that of uninfected donors, only a few copies of HIV, or even none whatsoever, would be present per millilitre. (See “Bad Blood or Bad Science: Are haemophiliacs with AIDS diagnoses really infected with HIV?” by Christine Johnson in Continuum magazine, Volume 5, No. 4.)

I would like to conclude with some critical comments made by biophysicist Eleni Papadopulos-Eleopulos and colleagues:

* Even the CDC accepts that a positive test in haemophiliacs is not proof of HIV infection. “It is possible that antibody to LAV [=HIV] is acquired passively from immunoglobulins found in factor VIII concentrates…. Likewise, it is possible that seropositivity is caused not by infectious virus but by immunization with non-infectious LAV or LAV proteins derived from virus disrupted during the processing of plasma into factor VIII concentrate.” (Evatt, 1985.)

* Levy and his colleagues have shown that the titre of HIV in plasma of HIV-infected individuals three, six or twelve hours after phlebotomy [blood donation] “dropped from up to 500 TCID/ml to 0.” [TCID = tissue culture infectious dose.]

Since in most instances, if not all, the time between phlebotomy and conversion of pooled plasma to factor VIII concentrate is considerably greater than three hours, factor VIII is made from plasma which is cell free and, since the late 1970s, factor VIII has been supplied as a dry powder, which may spend weeks or months awaiting use, how can one reconcile the above facts with the view that haemophiliacs are infected with HIV via contaminated factor VIII concentrates? (Papadopulos, 1995b.)